I love rainbows. I love all the vibrant colors put together, in the sky and on paper. But it’s not just the bright colors that make me happy. It’s the meaning that comes with the rainbow.

You see, God gave us rainbows for a reminder of his love for us. It’s not just a cool thing that happens when the sun shines while its raining. I mean, yeah, it’s beautiful and that is how rainbows are formed. But there’s more to them.

Sadly, these days, people don’t know that. Or don’t care. They put the colors of the rainbow on everything… But it’s for all the wrong reasons. They put it on flags, paint it on the middle of roads, and emblazon it on signs.

Truthfully–I would like to buy a rainbow flag in a heartbeat, I mean, those things are awesome! But I can’t. Because then people will think I support something that I don’t support.

It’s not that I disrespect the people themselves, but I disrespect the fact that they insist on being proud of their sin, instead of acknowledging it. That doesn’t mean I think I’m better than them; that’s not it at all.  I just think we need to try to avoid sin, not wear it with pride.

So if a rainbow doesn’t stand for the world’s sinful pride, then what does it signify?

“I have set my rainbow in the clouds, and it will be the sign of the covenant between me and the earth.” Genesis 9:13

A rainbow is a sign of God’s love for his creation. He made a covenant between himself and the earth in Genesis 9:9-14. He promised Noah and his family that the earth would never again be destroyed by a flood.

God made that promise because he loves us; he knew he would be ashamed of his people again in the future. And to keep himself from destroying his people whenever we upset him, he made a covenant with us. Because God always keeps his promises.

How ironic that we have changed the symbol of God’s beautiful covenant with us to a symbol of our humanly, sinful pride.

We’ve turned so far from him, but he still loves us and cares for us.

Because of the Lord’s great love we are not consumed, for his compassions never fail.  Lamentations 3:22-23

I will never stop loving rainbows, they cheer me up and remind me of God’s love for us. Despite how, in our sinful nature, we’ve distorted the meaning of the rainbow, I will always treasure the pale, colorful arch that stretches into the horizon with the sun streaming through it.

Do you love rainbows? 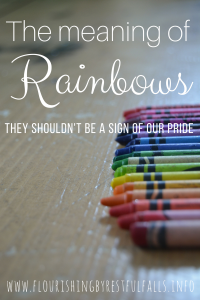